We’re Mark and Laura Woodward, working with SIL International, a partner organisation of Wycliffe Bible Translators devoted to serving minority language communities as they develop their languages, and churches as they seek to translate the Bible into local languages. Our vision is that, by 2025, together with partners worldwide, we aim to see a Bible translation project started in every language that needs it.

There are still dozens of language communities in Tanzania that have a potential need for Bible translation. While the Swahili Bible is available in most of the larger towns, it is really mother-tongue local language Scriptures that will speak to people’s hearts in many parts of the country.

Since late 2019 we have been based in the UK, where Mark has been working remotely as Director of SIL Tanzania, leading the organisation of around 160 staff serving language communities in Tanzania. In June 2020 we moved to Bryncrug in north west Wales, where Mark uses email, Zoom and various other online media to keep in touch with colleagues in Tanzania and around the world. We are hoping that he will be able to visit East Africa again soon, when travel restrictions are eased. 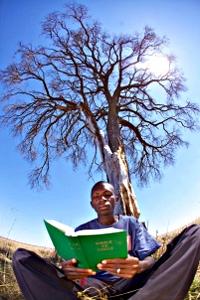 Mark had already been working with Wycliffe for three and a half years before we got married in January 2007 – most of the time spent in Tanzania where he was travelling around surveying the various language groups there to assess their need for Bible translation. You can take a look at more of what he did there on his old website.

From 2007 until mid-2010 we were based at the Wycliffe UK offices, where Mark served as the Recruitment Coordinator, encouraging people to think about how they could be involved in the worldwide Bible translation movement, while Laura worked for a time as Personal Assistant to the Director. After that we were living in Oregon in the USA, taking training, spending time with our home church, and building a team of supporters. Then from 2012 until mid-2013 we were living in Katavi Region, western Tanzania, helping the church leaders to translate the Bible and make it accessible throughout the Tongwe, Bende, Pimbwe and Rungwa language communities.

From 2014 to 2019 we were living and working in Tanzania’s main city of Dar es Salaam, where Mark was Director of Language Programs for Uganda and Tanzania, serving over 30 language communities at various stages of writing their languages, promoting literacy initiatives, and translating the Bible. At the same time Laura served our colleagues as they encountered daily challenges living and working in diverse cross-cultural teams, as well as providing child safety training for our staff throughout Uganda and Tanzania.

As we look ahead to the future we’d love for you to join with us on our journey, as we seek to support language communities and church leaders in Tanzania in their aim of seeing God’s message of love transforming lives!