Flickering Pixels by Shane Hipps is a fascinating look at communication media and the role these media play in shaping an entire culture. While Western culture emphasises the message and generally disregards the medium, Shane Hipps argues that media affect the way we think, and that until we recognise this fact we will be under their control.

Does that sound too deep? Let me give some examples…

Shane talks about how in oral cultures, where there is no written form of a language, people store information in their minds. When something is learned, it is passed on through the community, generally through telling and retelling stories. The culture therefore tends to be very community-oriented, and people derive their identity from the community.

When literacy is introduced to a culture, people have the luxury of thinking apart from the tribe, without worrying that their thoughts will disappear. The community is no longer needed to perpetuate ideas, and people will tend to become more individualistic.

“In pre-literate societies, a person’s identity is bound to the tribe; the notion of individual has little importance. However, the technology of writing, regardless of content, weakens and even destroys tribal bonds and profoundly amplifies the value of the individual.”

Another fascinating example that Shane gives is that of writing systems. He compares the Chinese pictographic alphabet, with the western phonetic alphabet. The western way of writing is a simple, linear, sequential list of symbols. The symbols in themselves have no meaning, but when put together they are very efficient at bringing meaning. As a result, western culture values abstract concepts, efficiency, and linear sequential thinking.

The Chinese writing system on the other hand involves symbols that actually represent a particular thing. In many ways this is a very inefficient way of writing – requiring a separate symbol for every single word – but the writing system is as Shane says “a visual art form”. Eastern culture similarly has developed to be nonlinear and holistic, valuing these things above efficiency and simplicity.

These media shape our culture, and even our understanding of Christianity. The Roman alphabet’s tendency towards efficiency and simplification has meant that western churches tend to emphasise the simplicity, rather than the mysticism of the Christian message. Our approach to the gospel is to present it as A + B + C = Go to Heaven, when other non-western cultures might take a more holistic and less simplified approach.

Shane goes on to look at other media since the printing press – particularly photographs (allowing for non-textual literate communication) and the telegraph (bringing instant communication over a distance). The telegraph, in many ways the forerunner of the internet, for example changed the culture by providing a mass of information. This mass had to be sorted through, and was assigned subjective value based on how the reader responded to it, paving the way for a move away from modernism, where the printed book with its sequential argument was king, to post-modernism, where a mass of information is weighed up by each person receiving it.

He then addresses social media (and what some might call our post-literate culture), which in many ways are a strange juxtaposition of previous media and their cultures. As a result they bring paradoxical ways of interacting with each other:

What does all this have to do with faith? Firstly Shane would say that it’s important for us to understand the culture that we live in, so that we are not trapped by it. Our culture likes to think that information is important, and the media of communication are simply serving us in our desire to pass on that information. But we need to be aware of how the media we use are actually influencing our entire view of the world, and of God himself.

But secondly Shane finishes the book by looking at the media God uses to communicate his message, and the fact that his ultimate means of communication with his people was through Jesus – a messenger who was himself the message. As Christians God has also chosen us to be his messengers, but like any medium of communication, we are part of the message itself.

“Why would God choose such a frail, failing, and inconsistent medium to embody his abiding message? Is it possible that God chose a collection of bent and bruised hearts to bear the message of redemption and reconciliation because that is a message in itself? Maybe God chose a medium of weakness to reveal his stunning power to reach through human failure, sin and sadness to grow new life.” 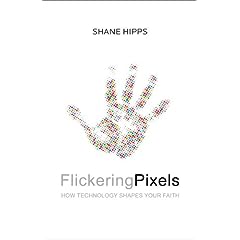 I don’t feel I’ve done the book justice in this post – you’ll just have to read it for yourself. You may also be interested in listening to a sermon I gave in the US a couple of weeks ago about Peter telling Cornelius about Jesus in Acts 10, which was actually influenced by some of the ideas of how God communicates that originated from the final section of this book.