Why is Bible translation important? How does it fit in to God’s mission of reaching out to all nations? What does it look like around the world today? What role can I play in it?

These are just some of the questions that we looked at last week in the Window on Wycliffe, or WOW course. Despite the name of the course, one of the messages that we were trying to get across was the fact that Bible translation is a whole lot bigger than just what Wycliffe does. In fact, we believe that translation is at the heart of God’s mission as he reaches out to people on their heart level.

Each of the five days had a theme, and we started the day by looking at that theme running through the Bible – God’s mission, Mission and Language, Incarnation and Translation, Investing in People, and Unity, Diversity, Partnership and You! The rest of the day would then be spent looking at how that theme affected the hows and whys of translating the Bible into minority languages around the world.

My contribution to the week involved leading a couple of sessions, including one on Languages of the World, and the research that needs to happen before a translation or language development project can start. I also taught part of the phonetics course, where we all learn to make some sounds that are quite unfamiliar to us and have a lot of fun in the process! 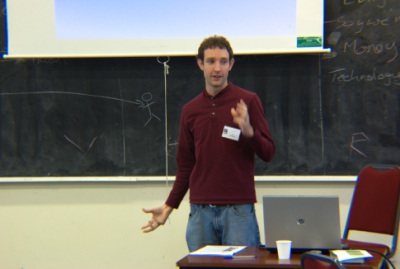 A highlight for me is always the cross-cultural role plays, where the participants get to feel what it’s like to be put in a situation that is very different from what they’re used to. One of the sessions in particular is good at highlighting that dilemma that we can feel when an unexpected change confronts us, and how we respond to that. 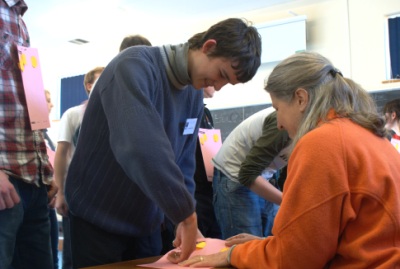 Collecting status in the form of badges 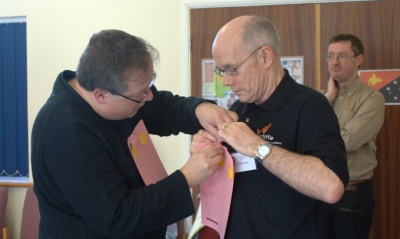 My bosses - future and present - attaching badges to each other 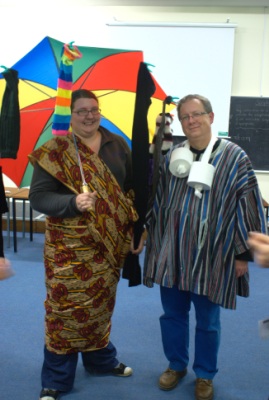 Another highlight is looking at ethics and realising that acting in an ethical way may not be quite as clear-cut as we first like to think, especially when we’re in a new culture. Most of us agree that it’s wrong to pay a bribe, but what exactly is a bribe? In the UK you can go to get photos developed and pay more to have them done within an hour – is that a bribe?

The more I think about issues of ethics the more I become convinced that the best way to know what is right and wrong in a culture is to learn from local believers who are able to read and interpret the scriptures for themselves in their own language and setting.

I loved the week, although I was quite tired by the end! For me it’s always encouraging to see so many people enthusiastic and open to joining with God’s mission in whatever way they can. A lot of my job is sat behind a computer sending emails, so actually getting to know real people who have an interest and a growing passion for Bible translation is very exciting!

If you’re interested in knowing more about the event, my colleague John has posted some more in-depth reflections. Please pray for the participants as they go away and think over the role that God would have them play in translating his message into languages and lives!