According to Brian, one of the most neglected sections of scripture (in the modern western church) is Genesis 1-11. And yet, Brian says:

The stories of Genesis 1-11 are foundational for understanding mission, salvation, and sin. They describe the world as God intended it as well as the world in which we now find ourselves. They are presupposition for the rest of Scripture. If we miss the message of these texts, we run the risk of mishearing the Bible. read more

I have just been reading about this section of the Bible in Chris Wright’s excellent The Mission of God, which has led me to agree with Brian that these chapters are key to understanding the rest of scripture. If we fail to understand what is happening in these chapters we can completely misunderstand the nature of God’s mission to the diversity of nations he has created.

In Genesis 1-11 we see a pattern of God creating good things, people misusing God’s good gifts, and then, instead of giving up on things and wiping everything out, God by his grace redeeming the situation.

In the beginning God creates everything and puts people in the garden of Eden. Adam and Eve disobey him and hide, but God doesn’t destroy them but clothes them and gives them a hope of a redeeming plan. God blesses people with crops and animals, but when Abel gives back to God a better offering than Cain, Cain becomes jealous and kills him. Even in his anger God gives Cain hope however, and promises that no one will harm him. As people continue to sin in ever worse ways, God decides to destroy humanity, but in his grace preserves Noah and his family, giving them hope and a promise of a future as they leave the ark to start a new life.

Genesis 10 and 11 then give two sides to the same story as people inhabit the earth. In Genesis 1, and again in Chapter 9 God has commanded people to go and fill the whole earth. Chapter 10 tells us that they did this – spreading out and occupying all the different lands, developing different languages. Chapter 11 then tells us something of how this came about – again as an act of God’s grace despite man’s disobedience.

Chapters 10 and 11 obviously aren’t in chronological order – chapter 10 tells of various peoples filling the earth and starting to speak their own languages, whereas chapter 11 starts by saying that at that time everyone spoke the same language. Instead, Chris Wright proposes viewing chapters 10 and 11 as two sides of the same story – one describing what happened and the other describing through what means it happened. One giving an account of the diversity of God’s creation as his people inhabit the earth and develop their own languages and customs, the other showing that once again this blessing only occurs as a result of God’s grace, despite the best efforts of mankind to rebel and take a different path.

This is a great example of why we need to read the Bible in the context of the whole story. To read Genesis 11 in isolation would leave us believing that everyone speaking the same language was a good thing, and that the linguistic diversity that we see around the world today is the result of a curse due to the rebellion of mankind. Our logical response is then to want to reverse this – we want everyone to speak the same language (as long as it’s our language) and everyone to understand each other. Why not just teach everyone English?

But reading Genesis 11 in context gives us a much different perspective. The confusion of languages at the tower of Babel was in fact following the familiar pattern of God creating something good, man rebelling and disobeying/misusing the responsibility, but God nevertheless going ahead with his blessing out of his grace.

God has already told people twice (in chapters 1 and 9) to inhabit and fill the earth. As a former sociolinguist I’ve seen first-hand that when a two groups go their separate ways, in just 3 or 4 generations their language (and probably their culture) tends to diverge to the extent that they struggle to understand each other and they become very much distinct and unique language communities. As God sent out his people to fill the earth, he did so knowing that they would form different communities and cultures, seeing the world from different perspectives, honouring him through different languages, the very nature of their praise reflecting the character of their creator.

But the people had other ideas. Their desire in coming together at Babel was twofold – firstly to make a name for themselves, and secondly to avoid being scattered across the face of the earth – in direct disobedience to God’s command to fill the world.

So God confuses their languages. But far from being a curse or an knee-jerk reaction to blatant rebellion against his command, the confusing of languages and scattering of peoples was in fact God continuing with his original plan that we see commanded in chapters 1 and 9 and worked out in chapter 10 – that people would inhabit the whole earth.

In Genesis 1-11 we see again and again (with Adam and Eve, Cain and Abel, Noah, Babel), God’s punishment which may seem at first to be a curse, but far from rescinding the good things he planned for creation, the punishment is actually a means through which God sets his people back on his original path of blessing.

We shouldn’t then be surprised when in the following chapter God calls Abraham with the intention that he be a blessing to the nations. Or when on the day of Pentecost God speaks through the disciples in a multitude of languages – to each person in their mother tongue (when he could have easily allowed them to all understand Greek or Aramaic). Or when we see in Revelation 7 a vision of people from every nation, people and language standing before God’s throne.

God’s plan from the start was that people fill the whole earth, that they speak different languages, and that they see the world in different ways. His intention was that the diversity of languages and cultures, just like that of the rest of creation, reflect his glorious creativity and imagination.

Mankind rebelled against this, as we have against so many of God’s gifts and the responsibilities he’s given us. But through his grace he doesn’t reverse his blessing but rather redeems the situation so that people of all nations can be united in Christ, bringing glory to him in all their immense diversity – just as he intended all along. 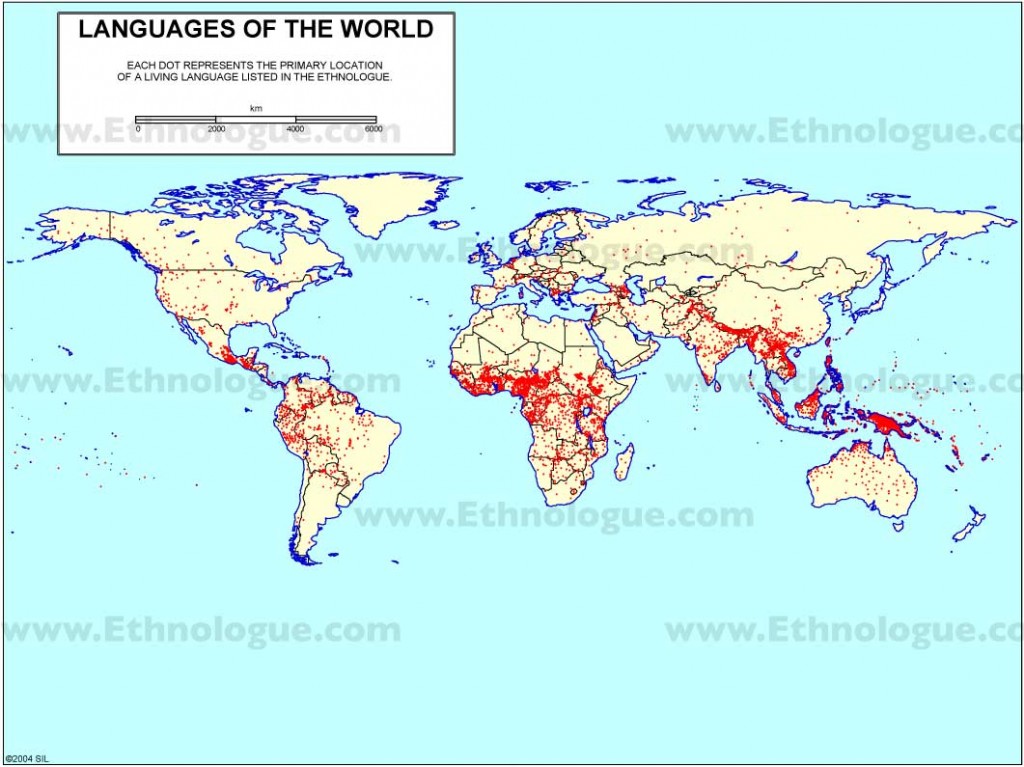 A map where each red dot shows the centre of one of the world’s 6,909 languages (via ethnologue.com)