Our human tendency is often to think about ourselves a lot more than we think about other people. Unfortunately this can be true in international development (of which the work of language development and Bible translation that we support is a part) just as much as (or more than) in other parts of life.

Crystal Hayling at the Center for Effective Philanthropy tells the story of a family who traveled to Cambodia to work in a rural village, which the parents hoped would help their children to understand poverty and their responsibility to help others in difficult situations.

When planning the trip, she explained, her kids had immediately dismissed Habitat for Humanity and other “traditional” groups because they wanted an authentic, personal experience. Prior to the trip, they’d gone online and researched places they could go and things they could do.  They’d found a small village that was building a library and some houses and that needed materials and books. “Perfect,” she thought. Emails were exchanged, arrangements were made.

But, she then went on to explain, the trip had all but been ruined by the fact that when they arrived the locals took the books and materials they’d brought and proceeded to build the structures themselves. Her kids, who had planned what they wanted to do and how they would direct the building process, were sidelined by locals who took over and did all the work themselves. Her kids were invited to participate, but they weren’t allowed to lead “their” projects. The goal of the trip, she complained, had been for her kids to feel how they could make a difference and this experience hadn’t provided that at all. “Overall, it left a bad taste in their mouths for future volunteer work,” she concluded. Read more

Crystal then wants to shout “It’s not about you!”

Unfortunately when we’re consciously trying to help others, maybe even more so than when we’re not, there is always a temptation to want to feel that “I have made a difference”. When the emphasis should be on “making a difference”, all too often it is on “I”. Rather than being glad to see progress being made, and privileged to have played a small part in it, we become frustrated that our plans haven’t worked, or that we didn’t play the key role that we (and our donors) expected.

Jesus called his disciples to leave their homes, families and livelihoods to follow him, but then after giving up so much…

I think this is a vital reminder for all of us that however “good” and “important” the work that we’re doing, and however much we think we’re helping people, it really shouldn’t be about us. As soon as we start thinking about ourselves, what we’ve achieved, or how important and needed we are, our contribution is really no more than a patronising facade.

May we be content to be the least, so that we can genuinely serve those we’re supposed to be helping. 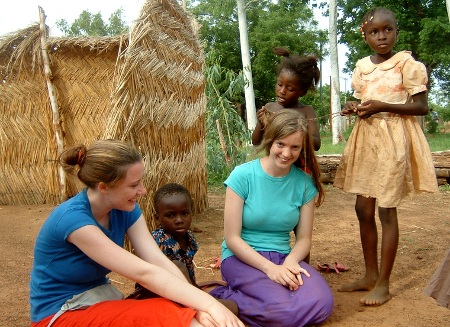 Lyndsey, Jayne and three children on our Wycliffe Engage trip to Burkina Faso last year. I should point out that they and the rest of the team were excellent examples of servant-hearted mission as they spent time with our hosts.