Why is mission – inviting people of all nations into God’s Kingdom – important for the church to be involved in? Maybe we would answer that by pointing to the “Great Commission” in Matthew 28. Maybe we would give a biblical basis for mission, looking at both the Old and New Testaments. Maybe we would see mission as being at the heart of God, and hence of the whole biblical narrative.

I’ve been wondering lately how the early church would have responded to this question, and have been struck by how little the question is addressed in Acts or in the letters of the New Testament. Mission is certainly a (probably the) defining theme of the New Testament, but nowhere do Paul or others refer to the great commission as their reason for reaching out to all nations. I can’t see anywhere where they give a biblical basis for what they are doing. It is just assumed. It is obvious.

I know the early church was far from perfect, and I think the book of Acts is mostly descriptive rather than prescriptive, but I still think it’s interesting how the early church apparently didn’t have a mission theology (at least not one that was separate from their other theology), or mission committees, or favourite missional Scriptures to cajole their members into sharing the good news far and wide.

Mission in the early church doesn’t seem to be one thing that they did among many – it is never spoken of in this way. In the New Testament mission is assumed to be at the very heart of the Christian good news, and of the very identity and purpose of the church. Of all the problems addressed in the New Testament letters, a lack of desire to reach out doesn’t seem to be one of them.

Why is this? What was it in the life of Jesus, in the gospel they were proclaiming, and in the Holy Spirit they had received, that made mission such a natural and universal response, almost without thinking or question?

What is different in the 21st Century? Why do we need a command from Jesus to obey, or a biblical basis in order to see that God is missional and we should be too? Why is mission often seen as one ministry of the church – something that we intentionally set aside some of our time and money for, alongside worship, Bible teaching and prayer? Is our theology different? Is our understanding of the Father, the Son and the Holy Spirit different? Have we had different experiences? Do we see and relate to the rest of the world differently to how the early church did?

What do you think? 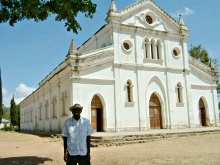