A couple of weeks ago we had the opportunity to visit friends Tim, Jeana and Micaiah in British Columbia, Canada, who we’ll be working with in Tanzania in the future. It was our first visit to Canada which was exciting (having previously only flown over it, and seen its mountains in the distance on honeymoon…!)

The weekend was a lot of fun as we were able to get to know each other better, and to think ahead to the new translation project that we’re hoping to be part of together. Tim visited the area – Katavi Region in western Tanzania – last year as part of a language survey team, and to meet the church leaders who we will be working alongside, so it was good to see some of his photos.

Laura enjoyed talking with Jeana especially about the need for member care in Tanzania, helping people to thrive physically, emotionally and spiritually in what can be a stressful cross-cultural environment. As Laura continues with her program in Psychology and Family Studies here in Oregon she is excited to look ahead and see how what she is learning may be able to benefit our friends and colleagues in Tanzania.

I’m sure Tim, Jeana and Micaiah would appreciate your prayers as they prepare to return to Tanzania in the coming months. They and several other families will be joining the church leaders in Katavi Region as they embark on the early stages of making the Bible available to the various language communities in the area. Please also remember to pray for the church leaders and for the people that they lead, as they witness to the resurrection of Jesus among the communities of Katavi Region.

Our hope is to join the team at some point next year after our studies are finished, but we’re still talking to various people about plans at the moment so would appreciate your prayers for that. Thanks! 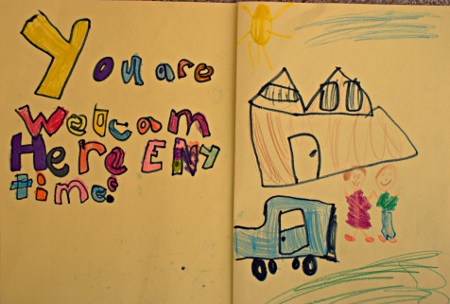 A beautiful card Micaiah made for us all on her own...!