Money. On the surface it looks so powerless. Just metal and paper. Small and insignificant. And yet these feeble images are symbols of something much larger, a force that exerts a power over the entire world. It seems that no one can live without this phenomenon and that its influence affects every part of life, from simple pleasures to life and death matters like access to food, clean water and healthcare. It even starts wars.

In many ways Money is a true religion. Its power is obvious to all. It excites, gives hope, and satisfies the deepest desires of its followers. Every human being has the god-given right to pursue Money, and anyone who suggests otherwise is immediately declared as blasphemous. Any who don’t give their whole lives to serve this god are looked down upon as being irresponsible, or worse, insane.

In some countries it is an intensely private religion. A devout and successful worshiper can be close friends with, or even a brother to, one who has failed to accumulate an adequate amount of wealth, but neither will speak of their respective success and failure. Though both are aware of the huge difference between them, neither would ever dream of the one helping the other out – this religion is after all just about you and god, and anyone else who even thinks of helping you is insulting your ability to be a devout worshiper.

There is another religion that many Money worshipers also subscribe to, which is seen by some as a rival, but most believe that it can be a useful tool in serving the goals of Money. Money worshipers are told that this religion isn’t bad in itself, as long as their attitude towards it isn’t wrong, and as long as it doesn’t take over their lives. When used in moderation this religion can be extremely effective in achieving the aims of Money, and there are many examples of worshipers actually giving up a small portion of their wealth to “charity” in exchange for respect and a comfortable position in society. These then give them the chance to freely pursue the true god without distractions.

Of course, one has to be careful. Apparently the teachings of the two religions are extremely contradictory at many points, but Money worshipers are particularly skillful at avoiding these non-essential points of doctrine. Whenever the core beliefs of the Money worshipers seem to undermine this other religion, worshipers are taught to see the beliefs figuratively, and that it is perfectly acceptable to be followers of both religions as long as one’s heart is in the right place.

While these two religions seem on the surface to be battling for the hearts and minds of the worshipers, in reality this is far from the truth. At the end of the day everyone knows that when they look back on life what will really count is not how devoted they were to the “servanthood”, “humility” and “love” of the other religion, but how much Money they have accumulated and how many things they have exchanged it for.

In the meantime, Money worshipers can be secure in the knowledge that this other religion really isn’t bad in itself, but rather the important thing is not to let it take over your life. After all, it is impossible for anyone to serve two masters… 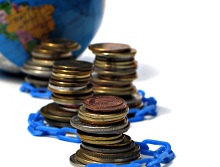