I have to be honest and say that Easter was a strange experience for me this year. I found it difficult to be at church on Sunday, celebrating the resurrection of Jesus in our church building. Something just didn’t seem to add up.

I found it difficult joining in with other Christians joyfully proclaiming that Jesus is risen, not because I didn’t believe it, but because I don’t think I’ve really understood what this means. I believe that Jesus was killed, dead, and that a few days later he was miraculously raised to new life in a resurrected physical body, but what does that mean for the history of the world?

Surely Easter is about so much more than this? Surely Easter isn’t just for Christians and for church services but for the whole world? Isn’t the good news that Jesus has made a way for all people to be part of his new Kingdom, God’s new creation? Isn’t the resurrection the proof that God has turned the world upside-down, putting the first last and the last first? Isn’t this Kingdom about new life, heaven coming on earth, freedom from oppression, the end of poverty and loneliness and the restoration of the whole world?

Then how can I sit in church feeling happy that I am saved and going to heaven? (I’m relieved to see I wasn’t the only one feeling this way – thanks John!)

To be honest it was only really this afternoon that I was able to genuinely smile again, coaching soccer with kids from the local neighbourhood, many of whom have probably never heard about Jesus. It was a privilege to watch them and interact with them, seeing them hungry to learn about soccer and also about life. It was a privilege to do so with a good friend who has sacrificed a great deal and traveled from thousands of miles away to tell these kids about Jesus.

Our prayer is that they will know that the resurrection isn’t just something that Christians celebrate when they have their strange meetings on Sunday, but that it was the moment that changed the universe, God breaking in to the cycle of sin and death, starting a new Kingdom of humility, love and peace, restoring what is broken, bringing forgiveness, releasing those who are oppressed, giving hope and a new life to those trapped in poverty, and ultimately through Jesus involving anyone who will accept the invitation in his new and perfect world.

Now that’s something I can get excited about! 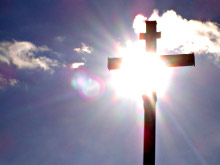