There has been a lot of debate in recent years about how the biblical phrase “Son of God” should be translated into languages where the majority of speakers are from a Muslim background. One side of the debate says that the phrase often used for “Son of God” is a huge stumbling block to Muslims engaging with the Bible, as it has connotations of biological sonship, implying that God had a physical son, and so a different phrase should be used. The other side argues that however the phrase is perceived the biblical message shouldn’t be compromised in order to make it more palatable.

Much has been written about this, with Christianity Today attempting to write a summary. Eddie Arthur, Executive Director of Wycliffe UK, has written on the issue here and here, and led a session for my MA course at Redcliffe College yesterday where we discussed the issue, where he also pointed to this helpful article.

To me the final article is significant as it makes the vital point that it is impossible to have this discussion in English!

[The Christianity Today] article talks about the attempt to use “spiritual Son of God” in a translation. But strictly speaking “spiritual Son of God” is an English expression. No translator is using it in a translation. What it proposed for a translation is an expression in the target language. That expression does not really match the English expression “spiritual Son of God” in all respects. Rather, it has its own nuances. And, as a whole, those nuances may be very close to what “Son of God” means in English. Similarly, “beloved Son who comes from God,” another expression given in the article, does not literally appear in any translation. It is an English expression. It is trying to represent in English some things about the precise wording in the target language. But it does not represent them with complete accuracy in English, even grammatically, because “who,” “of,” as well as the other words simply do not match the target language. The article talks about Muslims misunderstanding “the phrase ‘Son of God.'” But strictly speaking, they are not misunderstanding “Son of God,” but rather an expression in their native language. Read more.

This to me is the crux of the issue. The question is not should “Son of God” be translated as it is or changed to make it less offensive. If we were translating from English to English I would say “Son of God” should definitely be translated “Son of God” and not changed to a more acceptable version. But rather the relevant question is: What words should be used in the target language to represent as closely as possible the meaning of the Greek words ho huios tou theou?

I don’t think any phrase in the Bible should be changed in order to make it less offensive or more acceptable to people – we are not at liberty to change the biblical message. But we need to realise that translation isn’t as simple as exchanging each word in the source text for an equivalent one in the target language, and that seeking to provide a “word for word” translation (if this is indeed possible) can in fact lead to a less accurate translation if these words are understood in a way that is not intended in the text.

In this case the question the translators need to be asking is what phrase in the target language will bring to mind the same understanding and connotations for a speaker of that language as the phrase ho huios tou theou would have done to a first-century speaker of Koine Greek? If a particular phrase in the target language brings the immediate reaction that God had sex with Mary and had a physical son, I would suggest that maybe the words being used are not communicating the same meaning as the Greek words were to Greek speakers, and maybe the phrase should be modified! Simply substituting in apparently equivalent words has led to a primary meaning that is definitely not in the source text.

A more fundamental point that we briefly discussed yesterday was the underlying assumption of the Christianity Today article that English speakers can and should decide what phrases to use in a Bible translation into another language, without any knowledge of that language or culture. The attitude that we as outsiders understand all the complex linguistic and cultural issues, and can make hard and fast rules about what people should and shouldn’t do, is simply modern-day colonialism. Translation depends on an intimate knowledge of the complexities of both the source text and the target language, with all the connotations and nuances of various words and phrases.

At the end of the day the decision has to be made by the local community in consultation with experts in biblical languages, as the community are the only ones who can really know how the words are understood in their language. Let’s pray for translators and consultants in hundreds of languages around the world as they continue with the difficult job of coming up with words that communicate as accurately and fully as possible the meaning of the original biblical texts.

[Edit: Having posted this I’ve just remembered an excellent post from Wycliffe International about exactly this issue, which I meant to share instead of trying to say the same thing in a less eloquent way… if you’re still interested in reading more I’d definitely recommend reading it] 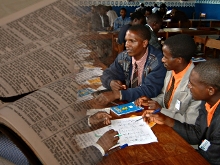