Laura and I have recently started leading a home group for our church, where a small group of people meets together every couple of weeks to encourage and support each other. For the first few meetings we decided we wanted to focus on communication, relationships (in the non-romantic sense) and how Jesus related to people.

In our first session last week we looked at how Jesus communicated to people what the kingdom of God is like. He didn’t just sit down with people and give them a list of bullet points or a 5-part sermon where every point began with the same letter for easy remembering. Instead, Jesus communicated what God’s kingdom was like primarily through his actions and through stories. Maybe he did this because he knew that stories communicate in a way that facts don’t. Maybe it was also because stories connect with us, inspire us to action, and can ultimately help us to see the whole world in a new light.

Kenneth Bailey suggests that the metaphors and parables that Jesus uses do more than explain meaning, they create meaning.

A parable is an extended metaphor and as such it is not a delivery system for an idea but a house in which the reader/listener is invited to take up residence.

The listener/reader of the parable is encouraged to examine the human predicament through the worldview created by the parable. The casing is all that remains after a shell is fired. Its only purpose is to drive the shell in the direction of the target. It is easy to think of a parable in the same way and understand it as a good way to “launch” an idea. Once the idea is “on its way” the parable can be discarded. But this is not so. If the parable is a house in which the listener/reader is invited to take up residence, then that person is urged by the parable to look on the world through the windows of that residence.

As we were planning for the session we were struck by the irony of analysing Jesus’ narrative approach to theology and kingdom proclamation, dissecting it and reducing it to a list of things that we could learn. Surely if we are learning that Jesus taught primarily through actions and stories, then it should at least be possible for us to imitate that? How could we invite people into a house, through whose windows they could look out to see the world differently?

So… with all our creativity (mostly with Laura’s inspiration as my imagination is severely lacking) we tried to work out a session where we would not only learn that Jesus taught through drawing people into the story of God’s kingdom, but where we would experience that by being drawn ourselves into that same story.

The result was an exercise where each person was given an imaginary first-century character, with various ideas and views about the world, who had come to follow Jesus for a day. Once the group had put themselves in the shoes (or sandals) of their characters, I read about three chapters of Mark’s gospel, encouraging the group to hear Jesus’ words and watch his actions as their character would have done so. The results were very interesting.

As we reflected together, someone who had been a rich and “blessed” ruler working closely with the Romans was confused by Jesus’ requirement that the rich man go and sell all that he had and give to the poor. The zealot who was looking for an inspirational leader to follow and was ready to die for his people was angry that Jesus would call someone who collected taxes for the Romans to follow him, and talk of being betrayed and killed by his enemies. The foreigner who felt like a second-class citizen felt a warmth and connection from Jesus as he healed the Syro-Phoenician woman’s daughter. The poor peasant woman who didn’t consider herself particularly important to God was curious about Jesus, intrigued by the examples from her everyday life that he used to talk about God’s kingdom.

I finished the session feeling that I had learnt a lot from the people in the group as they had entered into the story, engaging with Jesus as he lived and taught. Our prayer is that the things we learnt will not simply be a list of facts or applications, but that like any good story the seed will gradually grow and bear fruit in our lives over the next few months as we take up residence in a new house and look out on the world through its windows. 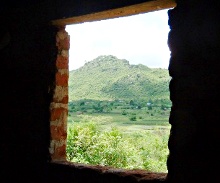