Jesus responded, “You say I am a king. Actually, I was born and came into the world to testify to the truth. All who love the truth recognize that what I say is true.”

“What is truth?” Pilate asked.

This evening we had a fascinating study at church after watching one of the “Truth Project” videos. We went through the first session which was an introduction to the series, looking at what truth is and why it is important that we know and believe the truth.

While I agreed with almost everything that was said in the video, I have one or two concerns about its approach. Is “truth” a valid hermeneutic with which to read the Bible? I think it is, but I also think that we need to be very careful in what we mean by truth, and aware of any subtle differences between the meaning of “truth” in our culture compared to that which Jesus and the biblical authors had in mind.

Modern post-enlightenment culture has a very binary view of truth. Everything is either right or wrong, true or false. Truth in modern culture is then very often the collection of every “true” statement. Believing the truth becomes “agreeing with every true statement”, or at least all the true statements that we think are important. In practice we see this illustrated in the doctrinal statements that churches and faith organisations encourage members to agree with. While these are generally good things, I’m wondering whether this is actually what truth is, or if truth is something much more profound.

My hunch is that in the Jewish worldview in particular (probably less so in Greek thought), truth is thought of less as abstract statements and more as an attribute of God. Truth is God himself – his righteousness, his faithfulness, his loyalty and steadfastness. It is defined in terms of how he relates to humanity, as well as being an intrinsic part of his nature. Believing in truth is then putting faith and trust in God to be faithful to himself and faithful to his people.

In this light, when Jesus talks about truth and claims to be the truth, I don’t think he is saying that he has all the right answers to the questions of the universe (although he does), I think he is saying that he is God himself, who is in his very nature faithful, righteous and true. When Jesus calls on people to believe in him, he is not calling them to tick all the right boxes on a doctrinal statement about him, but rather to put all their faith and trust in him, following him with their whole lives because he is trustworthy.

In saying this I don’t want to deny that it is important to believe the right “things”, as well as believing in the right person. As was pointed out in our discussion tonight, the two very much go hand in hand – we can’t believe in Jesus if we don’t know about him. But I’m just concerned that we don’t dwell so much on believing all the right things that we miss what it really means to believe in Jesus himself, who is the way, the truth and the life.

It is important that we believe the right things about Jesus, and about life in general, which is one reason why we take the Bible seriously. But when the thief on the cross believed in Jesus, he didn’t understand exactly what would happen or how his sins would be forgiven, and I very much doubt whether he knew that Jesus would be bodily resurrected in three days. Rather, he believed (at least to some degree) and put his trust in Jesus as the Truth – the one who is God and therefore is faithful and trustworthy to fulfill his promise to raise him from the dead.

I think truth is vitally important. My hope is that we don’t get so caught up in our cultural definition of truth as facts that we finish this course knowing more true things but missing out on the real Truth that is God himself, revealed through Jesus Christ in his life, death and resurrection.

What are your thoughts? 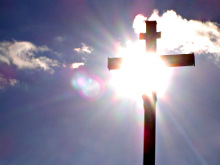