This Christmas Eve we spent the afternoon watching the movie Joyeux Noel, the story of Christmas in the trenches during the First World War in 1914. The movie of how the soldiers of various nationalities who had been fighting each other for months ceased their fire, greeted each other in no-man’s land and even played football together.

The most striking part of the movie is the absurdity of the war. When the men meet up at Christmas they realise they have a huge amount in common, and yet on every other day they are trying to kill each other because that is what their commanders, and their nations, have ordered them to do.

In many ways the First World War was the height of modernity, with the European nations accepting without question the narrative of the unstoppable march of civilisation and progress. In reality the nations at war had a great deal in common – shared histories, similar languages and cultures, and apparently a shared religion. And yet their narratives of progress, despite their similarities, could not co-exist but clashed leading to the loss of millions of lives.

As the soldiers socialise and share stories on Christmas day the absurdity is obvious to all. They have no hatred for each other, in fact they realise they have a huge amount in common. Their sole reason for being on the front lines is to carry out the orders of the generals, and the political leaders, who are in a totally different world. The ridiculous nature of it all is brought home on the day after Christmas when it is left to the priest to convince the soldiers that they are in a holy war, that they are God’s children and that it is their duty to kill those in the opposite trenches who are God’s enemies.

Watching the movie it is easy to see how the First World War was the start of the end for modernity and the myth of progress. The post-modern suspicion of metanarratives, controlling powers and absolute and abstract truth divorced from personal relationships, is the only natural response when you are commanded to put your life in danger in order to kill others, simply because the colonising ambitions of your countries are incompatible.

And yet while post-modernity is an understandable and vitally important critique of the absurdity and supreme arrogance of the modern Enlightenment project, it poses more questions that it answers, deconstructing good and bad alike, and pointing eventually down the road of hopelessness and despair.

If Jesus was on the front lines in 1914 I think he would have ridiculed the grotesque empire-building ambitions of the European nations and their arrogant myth of human progress. But I think he would also have warned against the descent into despair where all meta-narratives are viewed with suspicion. Maybe he would have pointed towards a new story, that starts with a child in a manger. Here we see the claim of absolute truth which is not abstract and detached, but the person of God himself. We see the claim of a universal story, but it’s a story not of power or control, but of God coming in humility and service. The victory and climax of this narrative comes not in military victory but in the child who grew up, living a life of humility and self-giving love, suffering and dying at the hands of a great and cruel empire, forgiving those who killed him before eventually being raised to life.

What does it mean for us to live out this story this Christmas time? 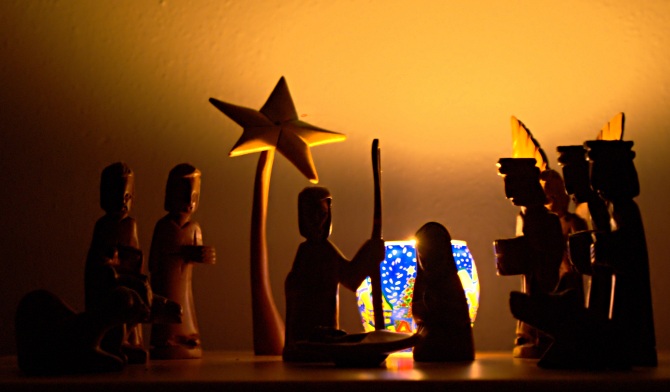