Having been in Mpanda for three months now we are starting to feel settled and are enjoying our work, making friends and organising our house to feel like a home! I’m particularly enjoying my job as operations manager, helping to set up and maintain the office for the project as our colleagues work with the local language communities to write down their languages and start translating parts of the Bible.

One of my favourite (in a tiring kind of way) moments of the week is Thursday evenings, when I get together with several of our Tanzanian colleagues to do a Bible study in Swahili. We have wanted to read through one of the gospels, so have started with Matthew and read a few verses each week.

When Jesus heard that John had been arrested, he left Judea and returned to Galilee. He went first to Nazareth, then left there and moved to Capernaum, beside the Sea of Galilee, in the region of Zebulun and Naphtali. This fulfilled what God said through the prophet Isaiah:

“In the land of Zebulun and of Naphtali, beside the sea, beyond the Jordan River, in Galilee where so many Gentiles live, the people who sat in darkness have seen a great light. And for those who lived in the land where death casts its shadow, a light has shined.”

From then on Jesus began to preach, “Repent of your sins and turn to God, for the Kingdom of Heaven is near.”

One day as Jesus was walking along the shore of the Sea of Galilee, he saw two brothers—Simon, also called Peter, and Andrew—throwing a net into the water, for they fished for a living. Jesus called out to them, “Come, follow me, and I will show you how to fish for people!” And they left their nets at once and followed him.

A little farther up the shore he saw two other brothers, James and John, sitting in a boat with their father, Zebedee, repairing their nets. And he called them to come, too. They immediately followed him, leaving the boat and their father behind. Jesus traveled throughout the region of Galilee, teaching in the synagogues and announcing the Good News about the Kingdom. And he healed every kind of disease and illness. News about him spread as far as Syria, and people soon began bringing to him all who were sick. And whatever their sickness or disease, or if they were demon possessed or epileptic or paralyzed—he healed them all. Large crowds followed him wherever he went—people from Galilee, the Ten Towns, Jerusalem, from all over Judea, and from east of the Jordan River.

After reading this we had a great discussion. One of the first questions raised was why did Jesus allow John the Baptist to be imprisoned, and later killed? Why didn’t he stop it, or rescue him? And then why didn’t he stop his own arrest and death? In the end we concluded that for whatever reason we see the pattern again and again in Scripture of prophets being persecuted and killed. The way of God inevitably meant persecution for many Old Testament prophets, and Jesus saw this as part of John’s, and his own, ministry. God could have chosen any other way, but it was the way of love, and then inevitably of suffering, that he chose to save the world. 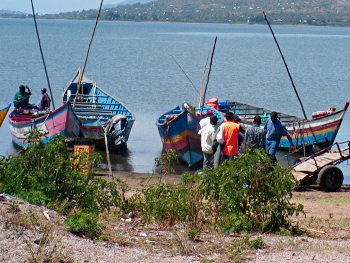 The other surprising thing was that Jesus chose four fishermen to be part of his team of followers. Why fishermen? Here in Tanzania, as probably in first-century Israel, fishermen are generally despised. Being a fisherman is not a prestigious job, and those who fish are often known for drinking too much and being generally immoral. It is not a particularly respected profession.

We suggested that Jesus may have chosen fishermen among others in order to show that one need not be from a noble or prestigious background in order to follow Jesus. In fact, we noted from experience that even those who may feel themselves more worthy must first be brought down low in order to truly follow Jesus.

I ended the session humbled again by who Jesus is and what he has done. My abiding memory will be of our good friend Mzee Mahena graphically illustrating what God has done for us, falling to his knees to act out how God “went down into the hole of pooh” (thinking of a toilet hole that has been used for many years) and “pulled us out, carrying us out of the pooh on his back.” That is what God has done for us, and as we read in Matthew, it involved him getting very dirty in the process.