On my recent trip to Mbeya I brought along a couple of second-hand books that we had been given a while back, to pass the 16 hours each way on a bus. One of the books was The Africans, by David Lamb, who lived in Nairobi, Kenya, for four years and travelled around several African countries as a newspaper reporter. I had expected the title of the book to be ironic, but no, Lamb really does aim to describe “The Africans” in 300 pages. (Given the fact that there is apparently more genetic diversity in Africa than in the rest of the world combined, in addition to immense cultural diversity too, one wonders whether it would actually be easier to write a book about The Non-Africans.)

After the first couple of chapters I was ready to throw the book out of the window as Lamb paints a pretty depressing picture of the continent as a whole. There is little hope, and quite a patronising tone towards Africa and its people. However, the fact that I still had 6 hours before I reached Mbeya and little other reading material persuaded me to keep going. I was glad I did, as there are some very interesting stories, and I learnt a lot about the history of parts of Africa (mainly from the 1960s, when many countries gained independence, to the 1980s when the book was written), albeit told from a particular perspective.

This perspective was evident throughout the book, and I ended up learning as much about the author’s worldview as I did about Africa. 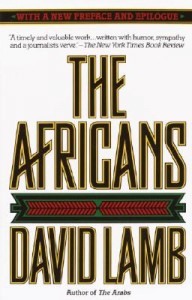 The book is obviously written for an American audience, as there are numerous comparisons with the United States. At times this is helpful (e.g. comparing sizes of countries), whereas at times it seems to imply that America is the standard of development that all African countries should be aiming for (e.g. comparing economic and healthcare statistics). On other occasions the comparison is just bizarre, like when the author asks the reader to imagine each US state having its own currency and trade restrictions, claiming that this is what Africa is like and this situation is thus an unnecessary hindrance to development (pp288-289). Errr… I’m not really sure it’s fair to portray the international borders of 50 different countries as being restrictive to trade by comparing them to regional borders within a single country!

The worrying thing about this perspective is that it seems to see certain countries as being the model that all others should follow, assuming that all countries are on the same path of development (or at least they should be), with some further along than others. Where the author sees things that are different to the USA (for example the many hundreds of languages spoken in Africa), these are viewed as a hindrance on this path to prosperity and something that holds people back, rather than a cultural resource to be treasured as part of the unique development of each country. It is assumed that the aims of all countries must be a strong economy, a western-style democracy, good medical facilities and long life expectancy. These may all be good things, but so are treasuring traditional cultures, honouring the past, living sustainably in our environment and giving dignity to the poor.

It can be very easy to take our view of what is important in life and to see other people’s lives in these terms. Lamb talks of the Masai as “nomadic people not greatly involved with the twentieth century” (p259). Really? Didn’t they become involved with the 20th Century in 1900 at the same time as everyone else? Or is their experience of the 20th century not as valid as that of others with certain types of technology? He also bemoans the way that wildlife is hunted and has become endangered in various African countries. On a certain level this seems valid, but he does at least see the irony of this opinion coming from Europe and North America, where almost all the large wild animals were wiped out centuries ago. It’s a lot easier to run a successful business or health centre when you’ve killed or chased away all the elephants first!

I was also interested in his take on Tanzania, for obvious reasons, although interestingly enough he has very little of a positive nature to say about Julius K. Nyerere, the first President of Tanzania and “Father of the nation”. Lamb is particularly harsh on Nyerere’s socialist policies, which he believes retarded development and left Tanzania in a very bad state.

Granted, the book was written in the early 1980s, which was definitely a low-point economically for Tanzania, but Lamb’s evaluation of Nyerere is in stark contrast to that of every Tanzanian I have ever spoken to. Nyerere is held in extremely high esteem by the vast majority of Tanzanians, credited with building a solid foundation for the country and a strong national identity which has led to a high degree of peace and stability in recent years. While Lamb focuses largely on economics, and related healthcare access, many Tanzanians will talk of Nyerere’s wisdom in building the nation slowly on solid principles rather than aiming for short-term gains, his determination that the poor and those in rural areas be central to economic development, and his strong but humble leadership, putting the needs of the country before his own personal gain. One’s view of history is very much defined by what one looks for and feels is important in life.

Thinking about Lamb’s portrayal of the continent in this book led me to reflect on how I communicate about the people I live with and the country in which I am living. Do I make huge generalisations, oversimplifying complex situations, or do I seek to understand people and the many nuances that they might see? Do I continually compare this country with other places, implying that it is somehow behind on the path of imitating these wealthier nations, or am I expecting it to continue developing in a way that may look very different to European and North American countries? Do I filter my experiences through categories that I think are important, or do I try to listen to the thoughts and values of others who may have their own goals in life that I haven’t yet begun to understand? Do I identify with particular people and cultures, and when talking to these people present others as “different”, or do I speak of all people as being unique and seek to promote cross-cultural understanding?

I was glad I read this book as in many ways it was an enjoyable read, and it definitely got me thinking. Maybe for my next bus trip I’ll try to find a book called The Non-Africans, possibly written by a Nigerian who lived in Beijing for four years…