Our team leader, Richard, and I were driving around Sumbawanga town this afternoon, trying to meet up with regional bishops and church leaders to update them on the progress of writing down the Bende and Pimbwe languages in preparation for Bible translation to start. Arriving at the house of the FPCT (Free Pentecostal Church in Tanzania) Pastor, we were told that he was at a meeting of Sumbawanga church leaders at the EAGT (Evangelical Assemblies of God in Tanzania) church.

Sure enough, when we arrived at the large EAGT church we found not just this pastor, but about 20 leaders from churches across the town. We were grateful for the opportunity to update these pastors on the work that our team has been conducting with the Bende and Pimbwe communities over the past few months, and our hope of seeing Bible translation started soon.

After giving this update, Richard asked the pastors if they had any questions. 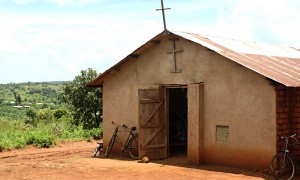 “How many Pimbwe are there?” asked one of the more senior leaders.

Richard answered that there are only about 20,000 Pimbwe according to our estimates, but that we still believe there is value in translating the Bible because of the impact that local language Scriptures can have in the life of the community, even if the language is only spoken in a few villages.

We looked up, expecting the Pastor to be sceptical, or to advise that our resources could be better used elsewhere. But no… instead he encouraged us.

“I want to encourage you that this is a work from God” he said. “When Jesus healed the man with the evil spirits, he ended up sending them into a large herd of pigs who then charged off the hill and drowned. This herd of pigs was the project of the whole village, and they depended on the business the pigs generated. But Jesus cared more about the life of one person than he did about the business project of the entire village.”

He continued “He probably should have been arrested right there, for destroying their business! But the point was that Jesus valued the life of this one man more than the wealth of the entire village. So I want to tell you not to become discouraged because there are few speakers, but rather be joyful that God cares even for a small group like the Pimbwe, and that this is a work of God!”

Richard and I went away thankful again to be working alongside church leaders here in western Tanzania, serving them, learning from them, and hopefully praising God with them as these language communities start to hear God speaking their languages.