On the train from Mbeya to Dar es Salaam this week it was fun to bump in to some of the backpackers for whom the TAZARA train seems to be an essential part of their African adventures. I was interested to hear their perspectives of Tanzania, as well as Zambia, Malawi and South Africa that they had travelled through.

However, it seemed that the travelers all came trying sub-consciously to answer the question: What is wrong with Africa? Whether it was in complaining about the train being a couple of hours late (not really a big deal when it travels thousands of miles, and there is no strict schedule anyway), or frustration at not understanding how the process works to buy tickets (yes there is an orderly queue even if you don’t see it, and no you can’t just push everyone until you get to the front), or thinking that workers digging a road are lazy because the majority are standing around (if you do manual work from dawn until dusk every day near the equator, you’d better pace yourself in the middle of the day or you’re not going to survive…), there seemed to always be the unspoken assumption that Tanzania is broken. The worst thing is that I can see all their same attitudes in myself when I first visited Kenya twelve years ago. 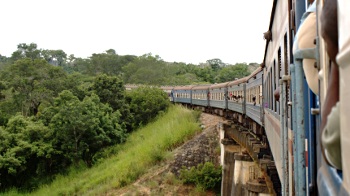 Why do we start with the assumption that there must be something wrong with Africa (by which we normally mean the countries of sub-Saharan Africa, with the exception of South Africa)? I think a lot has to do with the fact that we are constantly comparing every aspect of life here with that in Europe and North America, and perceiving major disparities in terms of economics, development and standard of living. Not only does this judge African countries by western standards of success (as I have previously complained about), I think these comparisons are also hugely unfair.

Sustained economic development is something that is incredibly difficult to achieve, as it relies on hundreds of factors (peace, security, transport infrastructure, communications infrastructure, healthcare, education, access to natural resources, a sufficient workforce, cooperative trading partners… to name just a few), the absence of any of which will make development extremely difficult. Not only this, but as these factors are all interdependent, their growth will often be exponential – the more you have of them, the more easily you can develop more (and the less you have, the more difficult it is to develop more). I would say that there are very few countries in the world who have been able to develop all these factors simultaneously and quickly.

The problem is that a naive tourist looks at what he sees in sub-Saharan Africa, compares it to his privileged life in England / America / Germany / wherever, and concludes that there must be something wrong with Africa. But he doesn’t take into consideration the fact that the economic standards he enjoys not only took hundreds of years to gradually develop, but that to a large extent they were a product of his ancestors forcibly occupying the lands of other people and enslaving large numbers of their workers, in order to provide the natural resources and manual labour that were lacking in their home country. To compare 50 years of slow but steady economic growth in Tanzania with 400 years of European and North American economic development achieved with the help of millions of slave labourers alongside the systematic pillaging of their lands, seems a little unfair.

Tanzania is far from perfect and has its share of problems (like anywhere it has its good people, bad people, hardworking people, lazy people… of whom I am often one…), but I don’t think there is essentially anything wrong with Tanzania. It isn’t Europe or North America, and it doesn’t really want to be. The Tanzanians I know have no desire to invade other countries or enslave people on the other side of the world in order to become one of the richest and most powerful nations in the world. They are happy to live in a peaceful country that is taking slow but significant steps forward to enhance the standard of living for its people.

They also appreciate being treated as equals, with dignity and respect. Of course, as a tourist you can still feel free to come and “explore Africa” with a condescending attitude, but don’t be surprised when people humour you just long enough for you to spend your money and move on to the next country on your tour…