Earlier this week I came across an article about how 300 Bibles in the Bahasa Malaysia language were seized for using words that originated from the Arabic language, including the word for God. This seems to be the latest in an ongoing controversy in Malaysia about whether Christians speaking Malaysian languages should be allowed to use words that historically came from Arabic in their translations of the Bible in those languages.

From a sociolinguistic point of view, a language borrowing “loan words” from another language is something that happens all the time. Of course, “loan words” is something of a misnomer, as the new words become as much part of the language as any other words, and will never be returned! English has borrowed words from a whole range of languages – French, German and Greek to name just a few.

Whenever a new concept occurs in a language, there is a need to name it, and the new name is almost never random. People generally make up the new name, either by modifying existing words in the language (hence we now talk about a “selfie”), or by using the word that was already used by speakers of another language for that concept (e.g. “pizza”). Sometimes the name is borrowed from a similar concept in another language, but the meaning changed, for example the English word “safari”, meaning a trip to see wild animals, comes from the Swahili word meaning “a journey”. The word then becomes a legitimate part of the language – a Swahili speaker can’t tell an English speaker that they are using the word “safari” wrongly just because its meaning in English is different from its meaning in Swahili.

This happens all the time in languages when new concepts are introduced, and can lead to interesting anthropological hypotheses about how peoples migrated over centuries and millennia, and where, when and by whom new technologies were introduced to communities. For example, over the past few centuries Swahili has borrowed from Portuguese (meza – table, pesa – money), Arabic (hundreds of words, mainly in the domains of religion, education and government, e.g. kusali – to pray, dini – religion, haki – right/rightness, darasa – class, kitabu – book, serikali – government, sheria – law etc), German (shule – school, hela – money, from “Heller”), and English (hundreds of words, mainly from new technologies of the past 100 years, e.g. gari – car, kompyuta – computer, baisikeli – bicycle etc). 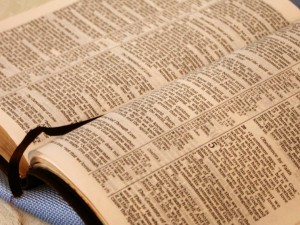 The same thing happens with religious words. In translating the Bible for example, very often the translators will find concepts in the Greek and Hebrew texts that don’t exist in the target language, and they will have to decide whether to use a word that has a similar but not identical meaning, to modify an existing word or phrase, or to borrow a word from another well-known language (or even, as a last resort, to insert the word untranslated, as happened with the word “baptise” in English). What is the best way to communicate the concept of “God”? Or “Holy Spirit”? Or “salvation”? Or “messiah”? This can be a long and tricky process, with potentially strong opinions from different sections of the community, or from different churches. Ideally, the word (or words) eventually chosen will be that which best communicates the concept in question, which may on many occasions be a word borrowed from another language.

So “borrowing” words from language to language is something that happens all the time, and has happened for as long as communities speaking different languages have been in contact with each other. In fact, you could argue that almost any word in any language will have its ultimate origin in another language if you go back far enough. So it is difficult to see how any language can have a monopoly on a particular word, or prescribe how that word should be used in other languages.

But, returning to the Malaysian situation, as an important caveat it is important to bear in mind that, as Andrew Walls explains, the Qur’an is the ultimate divine revelation in Islam, in one particular time, place and language, in much the same way that Jesus is in Christianity. Whereas the Christian Bible merely witnesses to the ultimate revelation of God, and so can be translated freely, Arabic, as the language of the Qu’ran, is central to the revelation of the God for Muslims. This may explain in part why this linguistic issue ends up being a point of conflict when very different worldviews collide.