Growing up in England and going through the English school system, I enjoyed (and endured) many hours of learning about history. In secondary school I remember learning that some historical sources were biased, and so had to be treated with care, while others were unbiased, and so were supposed to be more reliable. Since then I have come to realise that all history is necessarily told from a particular perspective, and there is no such thing as a neutral / unbiased / objective historical account.

Topics that I remember learning about in school include World Wars 1 and 2, the Roman occupation of Britain 2,000 years ago and the English civil war in the 17th century. There are other parts of British history that I never remember even being mentioned (although I cannot claim to have paid attention to every word that my teachers said…), for example British colonial occupations around the world, the American war of independence, and the complex history of Ireland. To this day the only understanding I have of past Scottish struggles for local autonomy from England is what I gained from watching Braveheart a few years ago. These topics do not seem to make it on to the history syllabus during the first 11 years of English school education.

As a result of the histories that we learn, and that we pass on, we build up certain views of ourselves and our society’s place in the world. The focus on the two world wars led me to believe that Britain was a force for good in the modern world, standing up for the rights of those invaded by greedy and cruel foreigners. While this has been true to some extent on some occasions, we did not learn about Britain’s part in forcibly taking control of large parts of the world in the last 500 years, or the numerous atrocities carried out, for example in India, in the Boer War in South Africa, and in the Mau Mau uprising in Kenya, to name just a few. 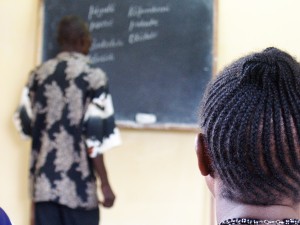 Ironically, some of the parts that we leave out of our education are the same parts that are foundational to the histories of others. The American war of independence, where Americans successfully defeated the colonial British army, declaring an independent nation – an event I never remember even being mentioned in my British education – would probably be considered the defining historical event of the past 400 years by most Americans. Likewise, for many other nations previously colonised by Great Britain or other European powers, the memory of colonial times, often with the accompanying struggle for freedom, is a key part of their understanding of the history and identity of their country.

Does it really matter that we tell different histories? I certainly don’t think it’s a bad thing, and yet we need to be aware of the fact that every society tends to tell those histories where it was in the right, and (in many cases) where it was the victor. Not only that, but we need to be aware of how the histories we tell affect the way we see the world today, and the ways in which we act in it.

As a Brit living in America, I may not agree with the strong opposition of many Americans to the idea of a healthcare system that is available to all regardless of their income, but if I am aware of the 18th century struggle for independence from a remote government collecting taxes without democratic representation and the ensuing effort to build a country where individual freedom was sacred and strict limits were put on the authority of the government, maybe I will better understand the context of the modern debate. As a Brit living in Tanzania, I may at times be frustrated with the way Tanzania’s socialist tendencies can stifle the development of new ideas, but if I am aware of the complex colonial relationship between the Tanzanian people and the Germans and British, who in many ways exploited the people and their resources while also trying (in a paternalistic way) to bring positive development, and the struggle for independence that followed, maybe I will better understand why Tanzania’s post-colonial leaders led the country so strongly in a socialist direction.

I think listening to and understanding each others’ histories is vital to cross-cultural living. When we learn to live in another culture we often spend a long time hearing about how people in that culture act, and sometimes what their values are. But unless we go deeper to understand the histories they tell, and how society’s values are birthed in those histories, the risk is that we may live in the culture knowing what to do, but feeling that the host culture is strange, confusing and even illogical. Cross-cultural living then becomes a chore, following apparently arbitrary rules, rather than a privilege as our view of the world is expanded.

If nothing else, I now see the process of studying the past as more than just listening to a teacher reciting boring facts about dead guys, and something that is a fascinating tool for learning about other cultures and worldviews, with a great deal of relevance as we interact with others throughout our globalised world.