Three unexpected guests arrived in our Mbeya office this morning, asking to talk with the project manager. They were speakers of the Ndali language, and had traveled from the north of Malawi, having heard that we are translating parts of the Bible into the Tanzanian dialect of Ndali.

After introducing themselves they presented a letter, asking that they be kept informed of the progress of the project, attend advisory meetings, and have access to the books that are being distributed. Their desire for Ndali books was obvious, as they explained how they use Scriptures from the neighbouring Ngonde language in church, despite it being difficult for them to understand.

Seeing some of the Bible books that our office has produced in Ndali, their eyes lit up with excitement! They pleaded that they should at least be able to take home a sample of the books, as they think through how to build a sustainable distribution network. “The people back home will not believe that these books really exist!” they exclaimed, “except there are three of us, so they’ll have to believe us!” They continued,

“When Noah sent out the dove from the ark, it returned with a small leaf in its mouth. When we go back home, we want to take with us at least a small leaf so we can show people that this work is happening!”

After discussing how the church leaders could potentially become part of the Advisory Committee for the project, and how Ndali literacy teachers from Tanzania could train their cousins in Malawi, we arranged for these men to take 20 copies of each Bible book that we have printed in Mbeya. They were overjoyed, planning to sell the books in Malawi and return with money to buy more copies and set up a network to distribute the books among the churches of northern Malawi.

As they were preparing to start their journey back home, one of the men turned to me and said, “I am old, like Simeon in the Bible. Simeon had been waiting for many years to see God save his people, and was overjoyed when he finally saw Jesus when he was a very old man. I tried to start the work of translation many years ago, and now I feel like Simeon, that I have finally seen what I have been waiting for all these years!” 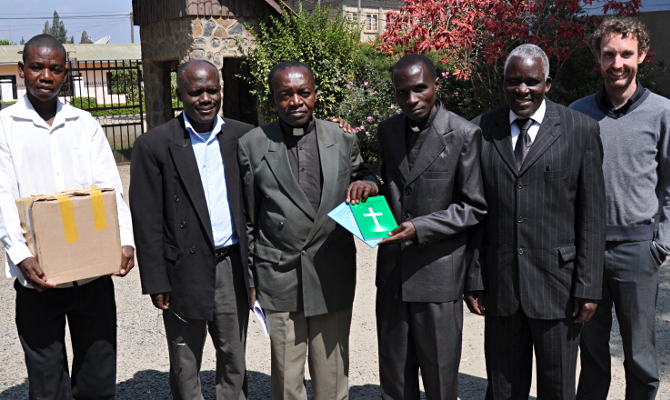 Baraka, Team Manager Mwaikokesya, the three visitors and myself