Next Friday the England football team will take on Scotland in an important World Cup qualifying game, and since the game happens on November 11th, Remembrance Day in the UK, both teams have proposed that they wear poppies (the traditional British symbol of war remembrance) to commemorate those who lost their lives in past wars. 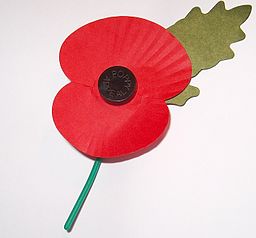 In the past 24 hours it has been revealed that FIFA, the governing body for world football, has denied the request of England and Scotland to wear poppies, as it violates their principle of not allowing political, religious or commercial messages on team shirts. Many in the UK have reacted strongly to this decision, with the Prime Minister Theresa May saying it is “outrageous”, claiming that the poppy is a neutral, non-political symbol to remember those who have died.

While it is undoubtedly true that many who wear a poppy do so purely to remember loved ones who have passed away in wars, I think it is naive to think that the poppy would be universally seen to be non-political.

A poppy may be seen by many in the UK as an innocuous non-political symbol helping to remember those who have died, but FIFA represents 211 countries throughout the world, so it also has to consider how the statement may be perceived elsewhere, by people and countries who may have a very different view of world history. If the Argentina team played with a symbol to remember those who died in the Falklands war, would that be perceived as a non-political symbol in the UK? If Japan wanted to remember their dead from World War 2, how would that be seen?

What if Iraq or Syria or Afghanistan want to remember their war dead in FIFA-sanctioned football matches? Or what if Kenya wanted to use a FIFA match to publicly remember its citizens killed by the British in the Mau Mau uprising? Or if the India football team made a public statement remembering Indian citizens killed by the British during colonial times?

Some of those examples may seem obviously much more political than what England and Scotland are proposing, to someone who has grown up in the UK. But the problem is that it all depends on your perspective. What for one person is an uncontroversial remembrance, for another is a strong political symbol with highly emotive and often painful connotations. Some claim that the poppy is a symbol for all who have died, in all wars, from all sides. But the fact that the symbol originates from the “Royal British Legion” means that it will not be universally perceived as non-political around the world.

Even within the British Isles, the poppy is not universally accepted as a harmless non-political symbol, as James McClean of West Bromwich Albion and the Republic of Ireland has made clear in refusing to wear one in recent years. Due to the poppy’s association with “all conflicts in which the UK has been involved”, and the experience of conflict where he grew up in Northern Ireland, he doesn’t feel he can support what the poppy represents. By the same token, it is unlikely that many English people would agree to an Irish or Northern Irish player commemorating members of the IRA who had died, at an international football match, or at the very least they would consider it a political statement. Now, many British people would feel that there is a huge difference between British soldiers and IRA “terrorists”, but who decides who has died fighting for an honourable cause, and who is a terrorist?

Questions of which causes are right, which are wrong, who is fighting for freedom and who are terrorists are not things that FIFA wants to be adjudicating, and looking around the world it is hard to blame them. Hence the strict insistence on no political or religious symbols.

Of course, one can argue that it is important at times to make a political stand anyway, even if it means breaking the rules, and there are numerous examples in the history of sport of brave individuals and teams who have done this to great effect.

But to naively assume that “our symbol” should be universally understood to be non-political, throughout all of FIFA’s 211 countries, is to ignore the fact that the world is a very big and very complex place, and that not everyone views world history the same way as most of Britain does.